It’s hard to believe that in just six short months we could go from our first stab at a Death Salon event to winging to another country to be in this beautiful place. 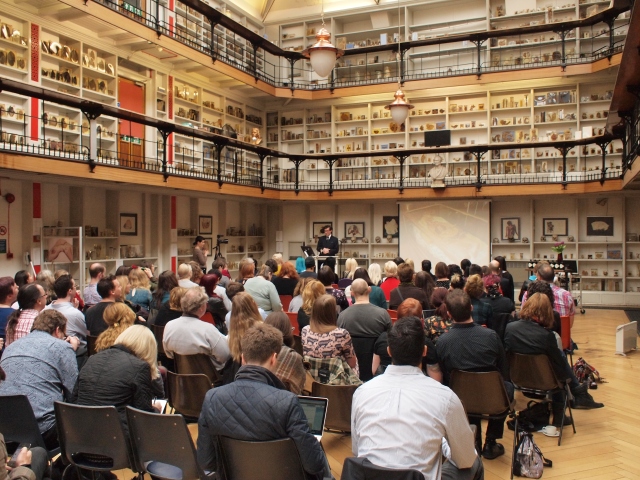 Surrounded on all sides by antique pathological specimens in jars, 120 Death Salon UK attendees took in a truly eclectic three-day program, masterfully curated by Barts Pathology curator Carla Valentine. Everything from the psychological effects of corpses on mortuary archaeologists, to the commercialization of Dia de Los Muertos, to the role of CT scanning in post-mortem investigations, to the fascinating Bolivian Skull Festival…the talks spanned disciplines, eras, and continents.

Much to the delight of the American Death Salon organizers, the program included plenty of local color to teach us about dying the British way. A representative of the NHS walked us through their organ donation process, the proprietor of Clandon Wood waxed poetic about his beautiful natural burial site (the Brits are far ahead of us in this movement), we heard the history behind London’s bygone Necropolis Railway, and had a survey of the past 150 years of British mortuary practice. Our crash course in British death practices culminated in a fascinating two-hour walking tour of the area surrounding Death Salon’s venue called Sinister Smithfield. Fascinating death history was literally around every corner, once we knew where to look. 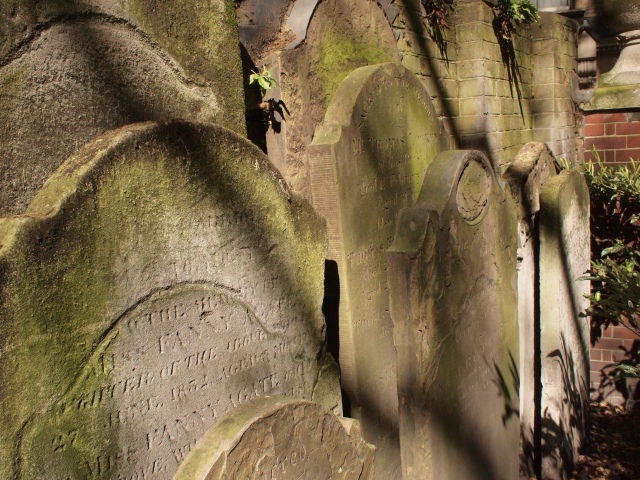 A stack of old gravestones just a-leanin’ against the wall in Postman’s Park. Photo by Megan Rosenbloom

For a full recap of all of the Death Salon programming, attendee Georgina Cronin‘s Storify gives you all you could need: ante-mortem day, peri-mortem day, and post-mortem day. I highly recommend taking a look at the Storifys to get a feel for all of the amazing speakers that presented and the crowd’s reactions to them.

“I usually don’t speak at things like this, but…” was, by far, the most common opening line from the Death Salon UK speakers, regardless of their background. After a few of these assertions, I realized that there’s a very good reason for that…because there aren’t other things like this. The UK press coverage reflects the diversity; how many events get covered simultaneously in The Guardian guide, The Independent, Stylist, Bizarre Magazine, and The Times Higher Education? One speaker early on day one took a walk through the crowd, asking people’s professions. The first four respondents were two pathological technologists, a circus performer, and a death doula. Where a program and audience this varied could lead to incoherence, the attendees overwhelmingly reported having learned something new from a different perspective that could inform their work, their personal lives, or their art. I am really proud to have helped forge that kind of community.

Coming up on October 11, 2014, we’ve got our very first one-day only event, which we’re calling Death Salon Forum: San Francisco. The details are still coming together, the best way to keep up with our machinations is to sign up for our mailing list. (Got a lead on a sweet SF venue for 100+? Do tell us.) Our big 2015 Death Salon event will be in New York at our beloved Morbid Anatomy Museum. Wanna make sure they’re ready for us? Be a doll and kick in a little in the next week or so. Also coming soon, stuff to buy to help support us. To get all gooey for a second, I hope you all know how much we appreciate your support in so many ways. We can’t wait to bring you more great events like Death Salon UK.

Barts Pathology Museum graciously lifted the prohibition on photography just for us. Photo by Megan Rosenbloom