Posted on November 8, 2015 by Megan Rosenbloom 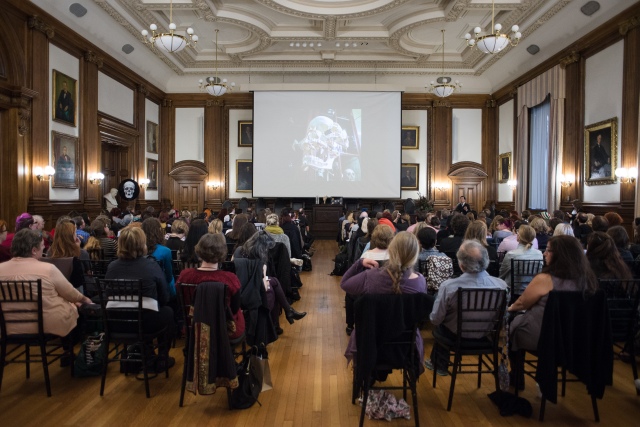 Like Rip Van Winkle, we’re rubbing our eyes, yawning, blinking into the sun after a long slumber. Could Death Salon Mütter Museum really have been a whole month ago? Was it all just some wonderful dream? Storify or it didn’t happen. Ah…there it is. Now that we’ve established its existence, let’s look back on the beautiful dream that was our fifth Death Salon.

The Mütter Museum in Philadelphia is a place that our director Megan Rosenbloom frequently refers to as “the happiest place on earth.” We’re confident that the Death Salon attendees now know what she means. This gorgeous 19th century medical pathology museum is unrivaled in the United States for its unique collections housed in a cozy brass and wood museum setting. We deathlings were so lucky to be able to invade its walls for a few days in October 2015, as there is no better place to contemplate our mortality than this one.

Though this Death Salon was just as varied as those that have preceded it, the programming particularly lent itself to an exploration of the interstices of death and medicine. One moment medical examiner Marianne Hamel laid bare the differences between television depictions of medical examiner work and real life. The next, Dr. Erin Lockard revealed the frustrations that even doctors themselves face when managing the end-of-life care of their relatives. Christine Colby gave instructions for protecting trans people in death, and Mütter Director Robert Hicks held a fascinating discussion about women’s bodies through “the medical gaze” of medical education. DS:MM co-curators Anna Dhody and Megan Rosenbloom also debuted their team’s anthropodermic book project and allowed visitors to see the Mütter’s collection of five of those confirmed human skin books –the largest confirmed collection in the world thus far. These talks represent just the tip of the iceberg of the incredible breadth of knowledge shared and touching personal moments that made this Death Salon the most special in our eyes.

Ain’t We Got Fun

Though our amazing speakers’ lectures are a huge part of the Death Salon experience, there was so much more going on this time around as well. Sunday before the main event, Atlas Obscura led an illuminating tour of Philadelphia’s 18th century cemeteries, and that night we donned our haute macabre finery and had a VIP Death Ball featuring the beautiful theremin and string quartet The Divine Hand Ensemble performing 16th century funerary music intended to be played only for the dead. (Proceeds from that event went to benefit the local Penn Wissahickon Hospice.) Monday evening brought us back to the Mütter Museum under dark of night for behind-the-scenes museum tours and an introduction to the folk music tradition of murder ballads, along with a stellar performance by Rosie Guerin & J. Tom Hnatow of Vandaveer, joined by Justin Craig, fresh off of his epic stintin Hedwig and the Angry Inch on Broadway. The dobro and singing warmed up the hall, made warmer by the addition of a special pale ale made just for us by Barren Hill Brewery that was infused with rosemary from the medicinal garden there. WHYY caught a glimpse of the performance here:

After the official festivities on Tuesday night, we gathered at a historic bar for a Death Quizzo pub trivia hosted by Caitlin Doughty, Anna Dhody, and Megan Rosenbloom who peppered teams of deathlings with trivia about general death, the Mütter collections, and death in Philadelphia respectively. We were also honored to have more than a dozen amazing artists and craftspeople vending their wares at our first ever Dark Artisans’ Bazaar, which was an incredible treat for all, even if we put a hurt on our wallets in the process.

Overall we couldn’t be happier with the way that Death Salon Mütter Museum came together, thanks to all of our amazing partners at the Mütter as well as our speakers, artists, volunteers, and most importantly, all the attendees. This Death Salon received great acclaim from its attendees and also in the press by outlets like WHYY’s The Pulse and Philadelphia City Paper among others. Thanks to everyone who shared this great experience in the City of Brotherly Love with us.

Never ones to rest on our laurels (or rest, period), we’ve already opened short film submissions for our next Death Salon event, our first ever film festival, which we’re holding at the Aurora Picture Show in Houston, Texas. This is a great opportunity for us to hear from the talented deathlings out there who are making film, or the talented filmmakers out there tackling death as a subject in some way. We’ll take submissions until July, they’ll be juried by Order members and Aurora folk, then we’ll pick the best ones to screen on September 24, 2016 in Texas. We’ll also be giving a Juror’s Award and an Audience Award. We’ve got our popcorn ready, deathlings. Let’s see what you’ve got.