Welcome to the next in our series of interviews with the organizers behind Death Salon. Here you will learn more about each participant’s contributions to the Salon, their own fascinating body of work and more about Death Salon itself.

I’ve long had a fascination with rare books and science from a historical perspective, but I never thought I’d get to make a career out of it. During my interview at USC, they had the firing squad Q&A portion of the interview in the rare book room. While I bet it intimidates a lot of applicants to be surrounded by those dusty tomes, it made me feel right at home. I saw Hooke’s Micrographia on the shelf and thought to myself, “If I get this job, I’m going to make it my business to spend a lot of time in this wonderful room!” That’s exactly what has happened, more than I ever could have imagined, and for that I am so grateful. In addition to my non-history responsibilities, I teach class sessions where I take medical students on a hands-on tour of medical history via the books we have in the collection. Seeing their eyes widen when they realize that’s a 500-year-old book they’re touching, and understanding all that that means…that will never get old for me.

Some people might not understand why history of medicine is important for current medical students to interact with, but I would say that one of the best things it teaches is humility. When a student sees what these greats of medicine have accomplished (while still being totally wrong about very important things that current students might take for granted), they can gain perspective that perhaps they also might not know everything. I think one of the great aims of evidence-based medicine is to get doctors to say, “Let me double-check the evidence on that first…” Also knowing that there is so much more medical frontier left to be explored, and that certain concepts of diseases or treatments can be proven wrong in the future, could excite young doctors toward innovation.

Besides doing tours and lectures for students, I create exhibits for the library on historical themes and am active in the Archivists and Librarians in the History of the Health Sciences. I invite authors who write on history of medicine topics to come to speak at USC. I’m extremely excited to be interviewing Mary Roach on stage for USC’s Visions & Voices the night before Death Salon starts. 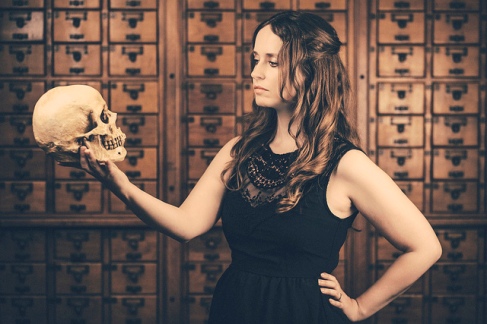 As one of the main organizers for Death Salon LA, what do you think is unique and important about this type of conference?

I’ve never organized a conference before, but I’ve been to a lot of them, large and small. I would say that starting something from scratch can be incredibly difficult because none of the logistic mechanisms are in place, so every day I have to make what feel like very big decisions about the way that Death Salon will go, and hope that I chose wisely. On the other hand, starting something from scratch that’s exactly what you and your colleagues want it to be is absolutely invigorating and worth the late nights slaving over Google Drive.

Besides being a brand new conference, I think Death Salon is a special conference for a lot of reasons. The topic is both totally academic and at the same time incredibly personal to most people, because it is something we all grapple with in a concrete way in our lives. Because of that dichotomy, there are voices coming from many perspectives that deserve to be addressed and respected. Also it has become very clear to me over the process of organizing Death Salon that a huge cultural backlash is brewing against our modern death denial and how it leaves us ill-equipped for dealing with death when it comes into our lives. The artists and writers of Death Salon have felt this tide changing for some time, and have dealt with this issue in their work in fascinating and inspiring ways. We’ve been getting messages from people all over the world who are excited about what we’re doing because they are fed up with where death denial has taken us as a culture. Death Salon is just one step toward beginning to cure that societal ill.

What are you most looking forward to about Death Salon LA?

I’ve been working for months now with an inspiring group of authors, artists, and death professionals to get Death Salon off of the ground, but many of them I’ve never gotten to meet in person. I really look forward to getting to know these people that I somehow feel like I know well, but really only know over reams of emails and Twitter at-replies, perhaps over a death-themed cocktail or an LA craft beer.